Note : In every month on Swathi Nakshatram day (ప్రతి పౌర్ణమి కి) there are so many devotees reach EGUVA AHOBILAM Temple and celebrate huge. 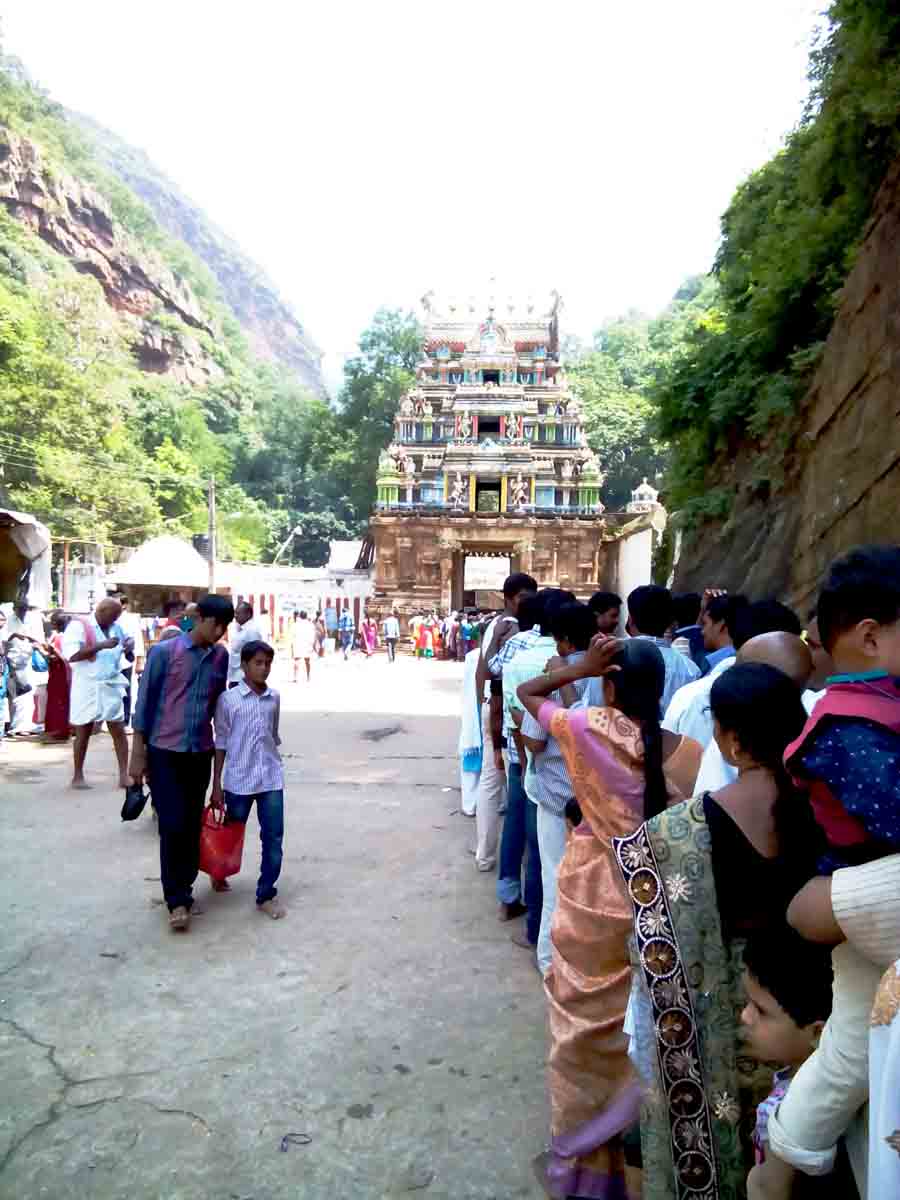 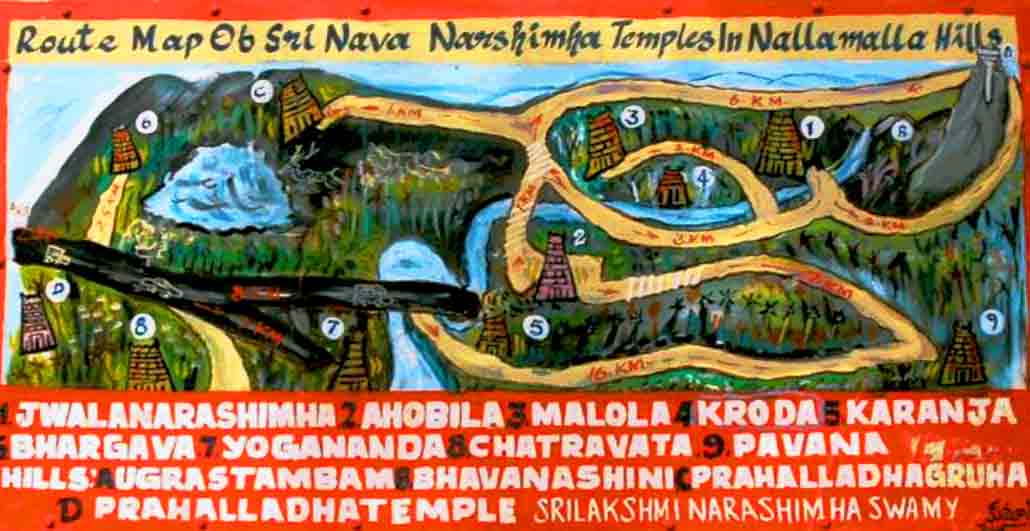 There are Two ways to reach Pavana Narasimha Swamy Temple

First Route is by Walk route from EGUVA AHOBILAM TEMPLE, It takes 4 to 6 hours to depends on your waking efficiency.

Second route : To visit Pavana Narasimha Swamy Temple by Bikes (or) any vehicles, you need to take permission at “Chital BaseCamp” Once you take permission with the forest security guard then you can go through the forest way for Temple. While going through this rout you really expereance adventure with this rout, because whole this rout is off-Road (Really amazing expereance). While travelling on this rout the total climate will changes frequently like, rain fall will occur for some time like that. By vehicle it may takes 1 Hour to reach Temple. 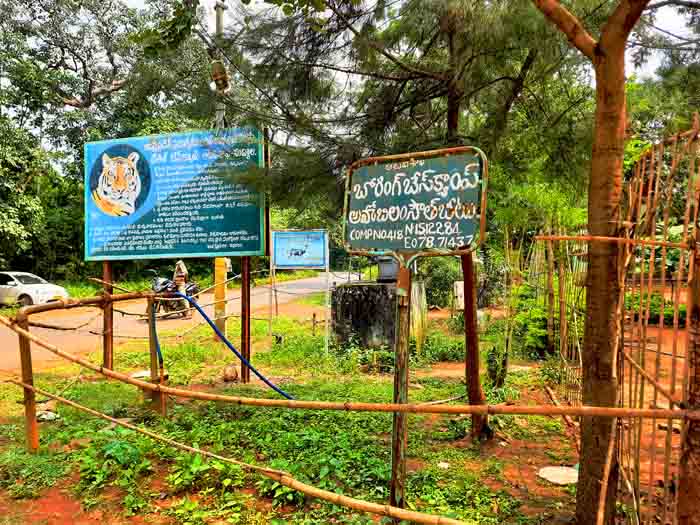 Note : To travel on this forest Off-Road journey, you must choose High Ground Clearance Vehicle like Off-Road SUV Cars as folloewd mentioned below.

Other vehicles : Also you can travel with Lorries, Tractors, Jeeps, Mini bus and any High Ground Clearance Vehicle 4 wheelers are compatible.

Devotees going to visit Sri Pavana Narasimha Swamy should properly follow the instructions given below. 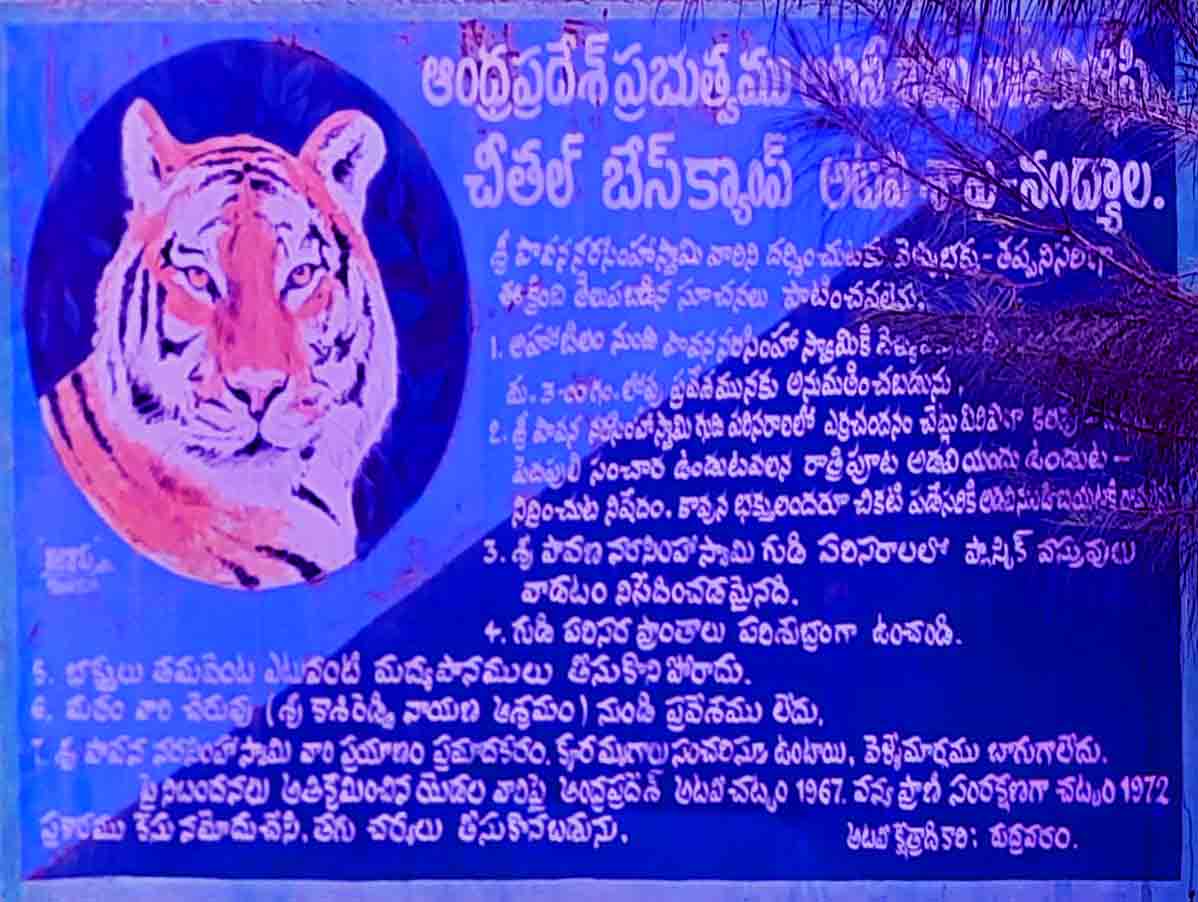 The devotees who are going to visit Pavana Narasimha Swamy Temple with vehicle should arrive at Chetal Base Camp Forest checkpost before 3.00 PM. After 3.00Pm forest security guards not allowed to enter into this route.

Route : This route is single way and somewheres have space for stay vehicles away while passing infornt of other vehicles. Don’t get out from vehicle, while travelling on this route. 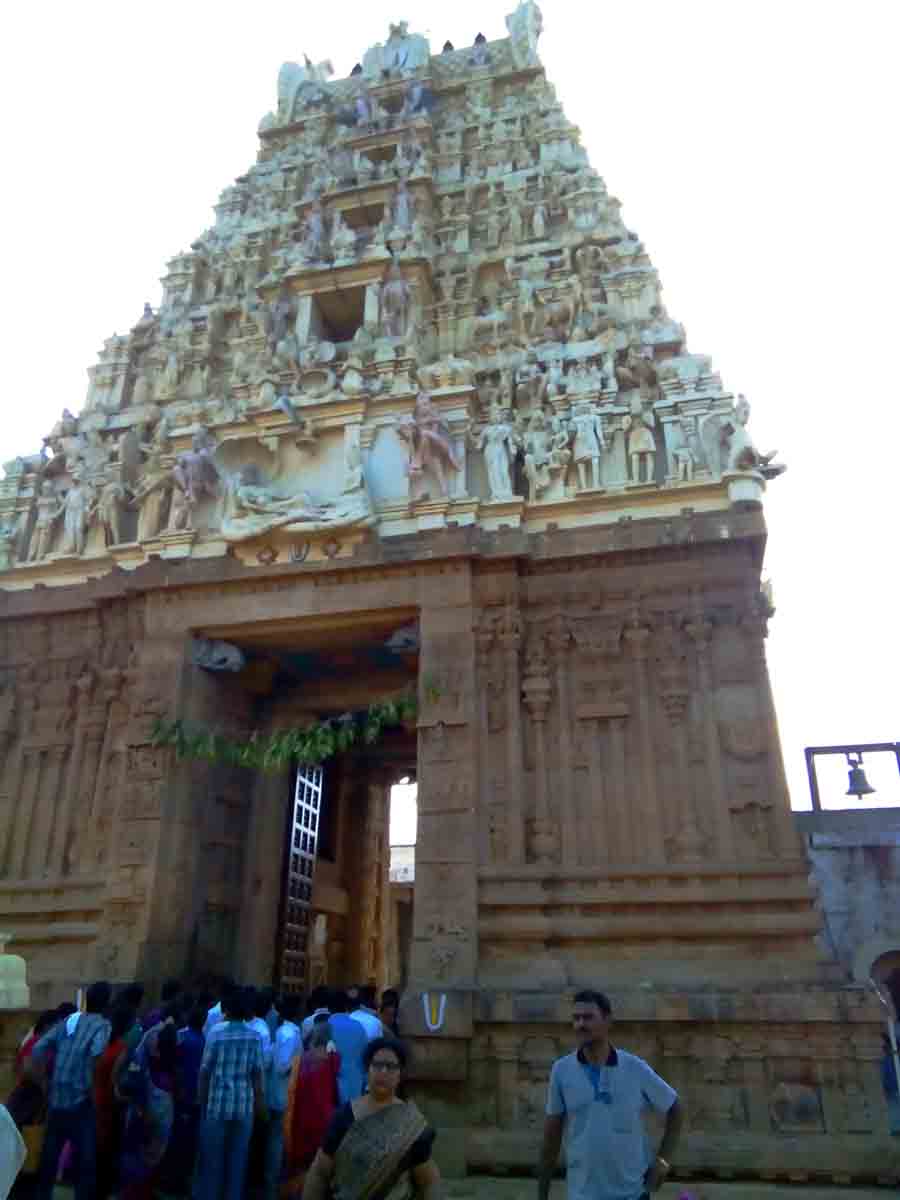 The Temple is open for pilgrims (యాత్రికులు) as follows. 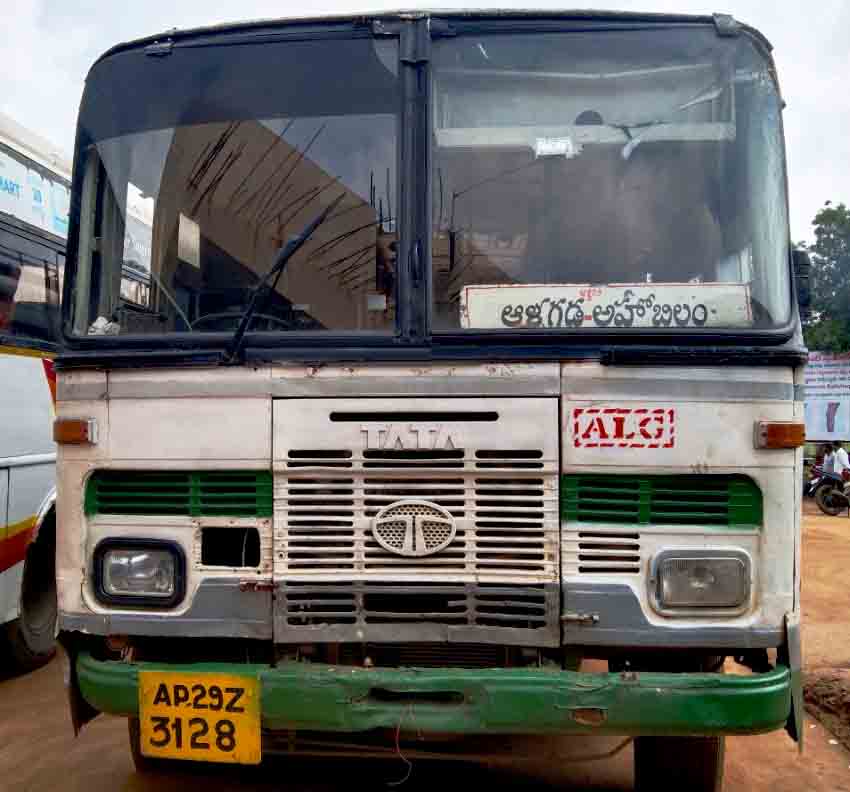 By Road:
Ahobilam pilgrimage center is in the middle of Nallamalai Hills of Eastern Ghat (reserve forest area) with Thirumala Hills on the southern end and Srisailam on the northern end.

This is at a distance of 25 KM from Allagadda Bus station. There are No.of A.P.S R.T.C buses and Private Vehicles from Allagadda to Ahobilam (Special buses available on request). 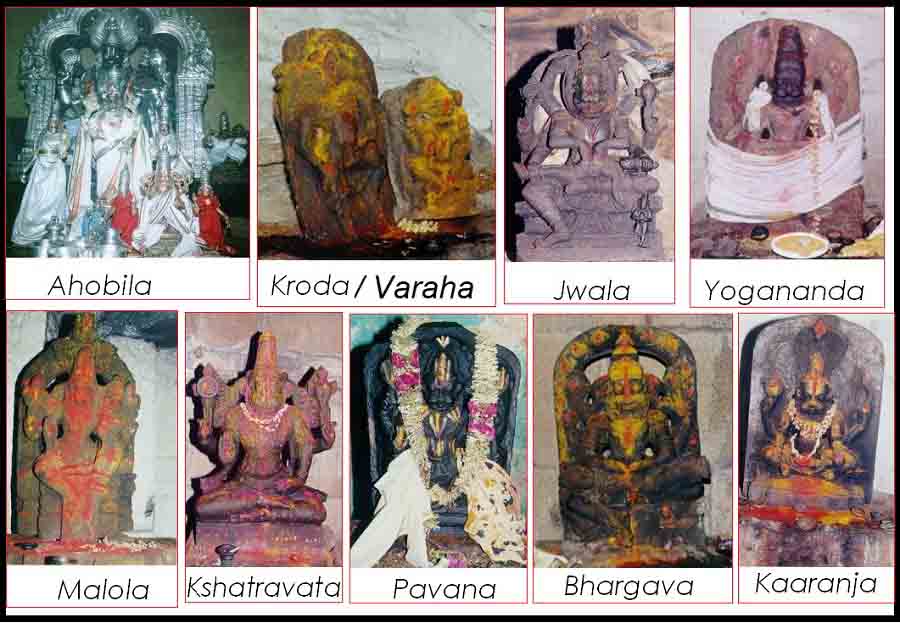 Jwala Narasimha Swami Temple
The temple of Jwala Narasimha Swamy lies higher up the above temple, on a hill called, ‘Achalachaya Meru’. This is about four kilometers from the Upper Ahobilam temple. This place is said to be the actual spot, where the fierce anger of the Lord reached its culmination when he tore Hiranyakasipu.

Sri Ahobilam Narasimha Swamy Temple
The temple, situated on the Upper Ahobilam, at a distance of eight kilometers from the Lower Ahobilam, is the main temple and the earliest of all the nine temples there. The Lord here appears in his fierce aspect, called Ugra Narasimha, who is the presiding deity of the temple and is known as Ahobila Narasimha Swamy. It is firmly believed the Lord Narasimha was “Svayambhu” (self- manifest) here.

Sri Kroda/Varaha Narasimha Temple
The temple of this Lord is one kilometer away from the main temple of Ahobila Narasimha Swamy on the EGUVA Ahobilam. The image of the deity has the face of a boar (Varaha or Kroda) and the Lord is seen along with his Consort, Lakshmi Hence the Lord of the temple is known as Krodakara (Varaha) Narasimha Swamy here.

Sri Yoganandha Narasimha Temple
This temple is to the south-east of Lower Ahobilam at a distance of 2 kilometers. The popular legend is that after killing Kiranyakasipu, Lord Narasimha taught Prahlada several yogic postures. Therefore, the Lord in this aspect is called Yogananda Narasimha.

The Lord in the Upper Ahobilam is said to be Swyambhu i.e self-manifested. There are two popular legends for the derivation of the word Ahobilam. It is said that the Devas while witnessing the ferocious form of the Lord and the terrific aspect he took on in order to tear to pieces Hiranyakasyapa sang in his praise

and hence, the place has come to be known as Ahobilam.

Another version is that because of the great cave, the Ahobila, where Garuda worshipped and realised the Lord. The place itself is come to be called Ahobila.

Ahobilam Temple is the only place where all the nine forms of the Lord Narasimha Swamy are worshipped. It is said that the entire Nalmalla Hills from Kurnool to Chittoor are a personification of Lord Adisesha himself whose tail end is Srisailam, whose middle is Ahobilam and whose head is Tirupati.

There are inscriptions which refer to Vikramaditya of the Western Chalukyan Kings of Kalyan (1076 AD – 1106 AD) worshipped the main deity of this temple. King Krishna Deva Raya has also visited this shrine on his return from the conquest of Kalinga and made offerings to the deity.

For any queries (or) suggestions regarding AHOBILAM Temple, please feel free to tell us through below comment session.